Below you can read about typical race day weather, Spain's climate, and see the average weather conditions in Granada and Málaga.

Due to its large size, the climate of Spain as a whole is difficult to characterize. The country contains 5 primary climate classifications, with further sub-groupings in each. Generally, these can be divided into: the Atlantic coast, the central plateau, the southern/eastern coastal regions, the mountains (Pyrenees and Sierras), and the Andalucían plain. Although most of the country can broadly be considered Mediterranean, altitude, distance to the ocean, and a number of other factors can alter temperatures/rainfall significantly.

In most of Andalucía, the climate is closer to Northern Africa than Northern Spain. Although there is even some variation within the region, the majority of the climate is classified as hot-summer Mediterranean. It is home to the hottest and driest summers in all of Spain, while the winters are mild and sunny. Some cities, like Granada, are located at a higher altitude than the rest of the plain. This tempers the heat slightly, so nights can be quite cold, but days tend to still be relatively warm.

See the average temperatures and precipitation per month below in the tables. 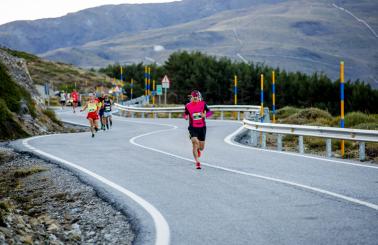 In early October, the weather is still warm and sunny in Southern Spain. However, the World's Fastest Marathon starts up at altitude - specifically, at 2,605 meters. Up on the mountain and early in the morning, it will be chilly. If it's windy, the temperature can feel much colder than it actually is. Runners should keep in mind this cold start, although as you descend the mountain and the sun rises, the air will gradually warm. By the time you hit Granada, we expect a temperature somewhere between 20-25°C. Rain is rare, but of course there is a slight possibility.